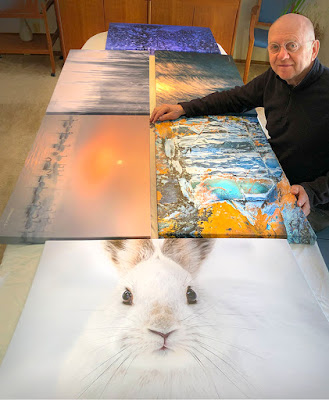 On March 21, 2018 Jim finished a milestone of making a photo of every day of Minnesota's four seasons. After shooting winter, the entire year is now complete.

The project began with autumn in 1994; he set the goal of making only one photograph each day, all shot on negative film.  His bestseller book Chased by the Light followed.  The entire 90 days were published in National Geographic Magazine November 1997, titled "North Woods Journal".  It set the record of the most photographs in one feature in the magazine’s 125-year history and by-the-way with the least amount of film.

Summer was shot in 2001 using his first digital camera; each photo had a file size of much less than today’s hi res cameras.  The summer season was published in National Geographic in the June 2003 issue titled "Boundary Waters". This set another record by being the first feature in NGM using a digital camera.  The book Looking for the Summer followed.

Jim shot spring in 2014, using his latest digital cameras.   Once again NGS published all 93 photographs April 2016 in "93 Spring Days". He broke his own 90 photos in one feature record with NGM.

As a point of reference and to show the extreme advancement of today's equipment, his winter images average at 130 megabytes each.  He shot most with the new Nikon D850 mostly using Zeiss 18mm and 85mm prime lenses. The difference in quality of the images from all seasons is profound.

Some of his new winter images are now on display at our Ely Brandenburg Gallery.  Stop in to see all his latest work.  We will keep you posted as to our plans of publishing the entire years work in one book!