Press Release from the German Society of Nature Photographers (GDT) honors Jim Brandenburg with Fritz Steiniger Award in recognition for his extraordinary contribution to nature photography. 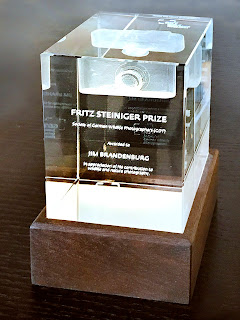 "It was indeed an honor to have received this esteemed recognition from my European peers last week."

Jim Brandenburg – photographer, film maker, author, art historian, photo journalist and conservationist. This US-citizen's biography, born in Minnesota in 1945, is as impressive as the man himself. If you were to describe him in three words only, it probably would be curiosity, empathy and modesty. An extraordinary talent, whose images and films continue to enrich the world significantly.

Jim Brandenburg's photographic career is closely linked to National Geographic Magazine, which had him employed as a photographer for more than three decades. His numerous books have gained international fame, inspiring an entire generation of nature photographers. With "Chased by the Light" he created a milestone of landscape photography, and the cover picture of his book "Brother Wolf" has become an icon of nature photography.

During the course of his life, Jim Brandenburg has received a multitude of awards for his work in photography and journalism. BBC Wildlife Magazine and the Natural History Museum in London chose him as Wildlife Photographer of the Year and the National Press Photographer’s Association (NPPA) twice awarded him the title Magazine Photographer of the Year. Four of Brandenburg’s images are part of a unique collection that represents the 40 most important nature photographs of all time, chosen by members of the International League of Conservation Photographers (iLCP).

Promoting issues of nature conservation through expressive photography has always been a major concern to him. Captivated by the prairies of his native Minnesota from an early age, he founded the Brandenburg Prairie Foundation in 1999, an organisation dedicated to the protection of this highly endangered habitat. In addition, the committed conservationist regularly produces pieces for television, radio and the internet to inform a wider public audience about other environmental issues.

On the occasion of the 25th Nature Photography Festival in Lünen, this year on 28 October Jim Brandenburg has been honoured with the Fritz Steiniger Award, the most prestigious prize the GDT awards for extraordinary contribution to nature photography.

About the Fritz Steiniger Award Professor  – Fritz Steiniger was one of the founding fathers of the GDT, who had significant influence on the society's development throughout its first years. Dedicated to his memory, the GDT named its most supreme award Fritz Steiniger Award, which is given away for special contribution to nature photography. The first photographer to receive the award in 1986 was Herbert Erich Maas. Over the years, he was followed by Heinz Sielmann, Fritz Pölking, Horst Niesters, Frans Lanting, Klaus Nigge, Dietmar Nill, Winfried Wisniewski, Hannu Hautala and Steven Dalton.