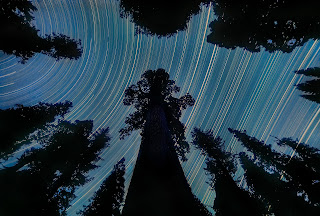 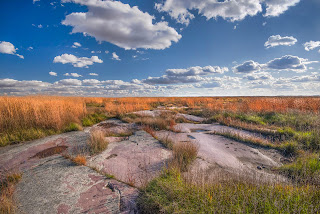 At noon on this Earth Day, I am reminded of the landscapes on the earth that have inspired and moved me in a deeper way than all of the other of the world’s spectacular places I have been so blessed to walk upon. Some can be overwhelming in their grandeur. Some have a joyful or important experience attached to them, perhaps like a treasured photograph I was able to make of them and keep in my midst.

But two places have remained in that special treasure chest in my mind. The Giant Sequoia groves in California strongly spoke their power to me and conveyed nature’s deepest essence – mystery, majesty and wonder. The feeling of walking beneath the largest living things on earth has stayed with me since I first saw them 30 years ago. For 3000 years many human tribes have passed some of the same 35-foot-wide giants that grow there.

Then, the second landscape that has forever been with me is the treeless tall grass prairie and Sioux quartzite boulder covered prominence a mile from my family farm birthplace in S.W. Minnesota’s Rock County. We call our 1200-acre prairie preserve Touch the Sky Prairie because this rise in the landscape lifts one up higher than the surrounding terrain - both visually and emotionally. The Sioux quartzite bedrock below your feet is some of the oldest and hardest on earth. The bedrock is 2 miles deep and gives me a true sense of being grounded to the earth below. The tribes that lived here long before also revered this place, I have seen much evidence of this.

Exotic landscapes like the Himalayas, steaming enchanting African jungles, parched desert sands and animal filled plains along with the nearly inaccessible North Pole certainly made powerful impressions on me. But the two places I dwelled on here have stayed and lived with me in the deepest way.

Today I hope we are all able to take some time to reminisce, reflect upon and honor those places that have touched each of us, whether it is a far-off enchanted landscape of our past or a familiar nearby sacred private spot with meaning.

The two photographs attached are an all-night 10-hour star-streaked winter exposure of the General Sherman tree, the largest sequoia in Kings Canyon National Park California. The other is a fraction of a second captured autumn moment of my sacred Touch the Sky Prairie near Luverne, MN.

A Happy Earth Day to you all,