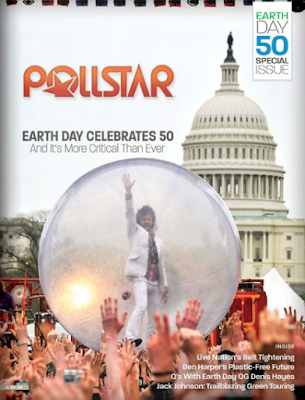 Besides my photography and film work, I’m particularly proud of my connections with the music industry and honored to be included in this Pollstar article about the 50th Anniversary of Earth Day. James Taylor was the first artist I worked with when he agreed to do two benefit concerts for wolves. Long story short, it was the proceeds from the concerts that became a crucial part of the reintroduction of wolves in Yellowstone and the creation of Concerts for the Environment (CFE).


Over the years I felt we made a difference. Another example that stands out, Con Edison (an electrical supplier for New York City) was planning to build a hydroelectric dam on First Nation tribal land near the Hudson Bay area. Because of the CFE concert in NYC and the printed materials that we produced, protests followed and Con Ed changed its mind - the project was stopped. Dozens of artists donated their time for CFE environmental causes, including Sir Paul McCartney at Hollywood Bowl. We also worked with Willie Nelson, Steve Miller Band, Indigo Girls, Boyz II Men, Kenny Loggins just to name a few.