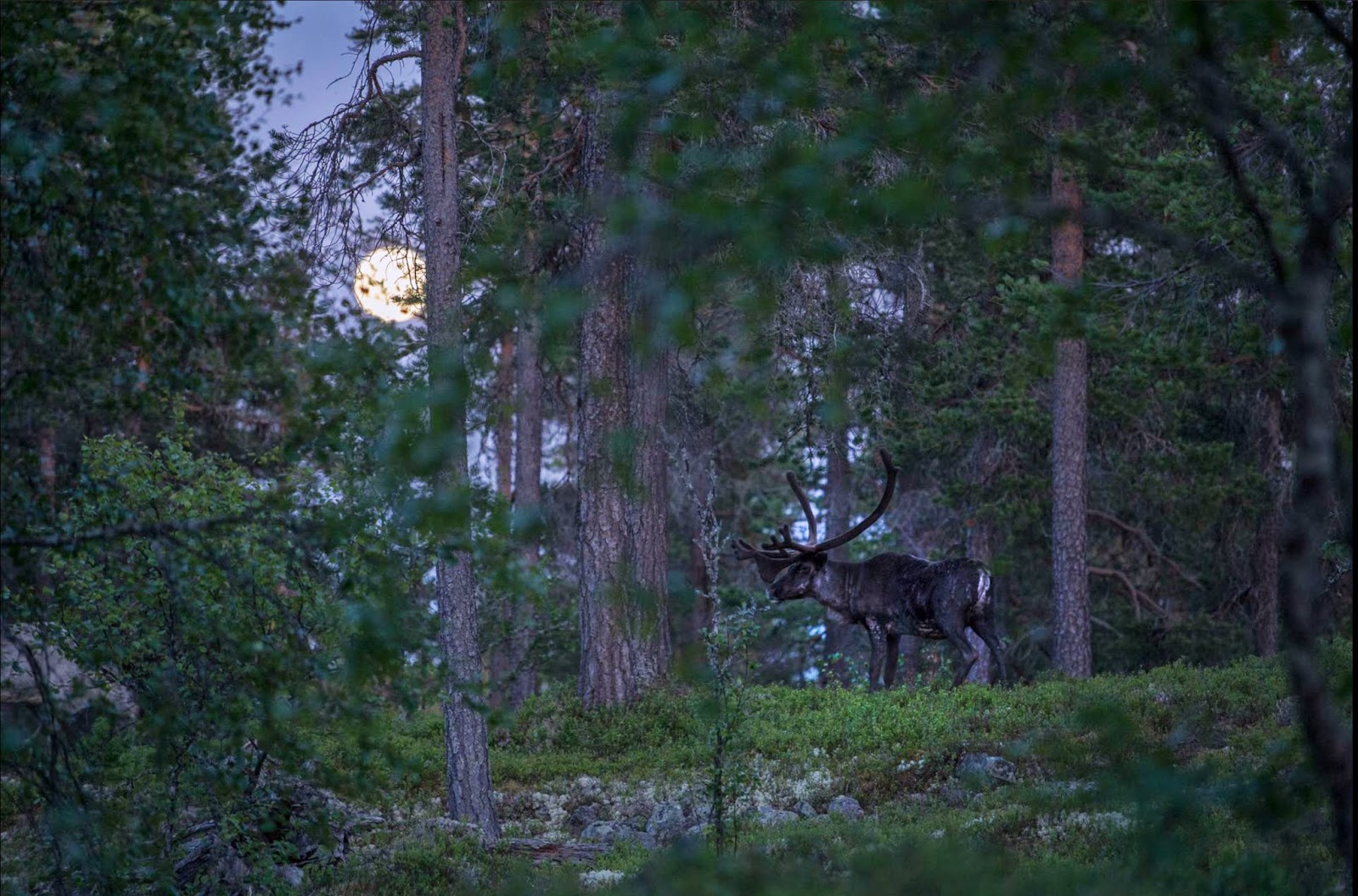 "For the full Harvest Moon on September 8th, a Swedish bull reindeer in northern Sweden contemplates ..... or could it be a Finnish reindeer that crossed the border looking for a mate?"

Jim's Extra Backstory: "I’m pleased to see Milli had picked this image for the Pic of the Week.

Last year I spent the summer in Scandinavia with some time in the mountains of Sweden. Reindeer (Renar in Swedish), similar to our North American caribou, have always fascinated me. Now I know why.

One evening while hiking in the high forest I happened upon a pair of magnificent bulls in prime velvet. As I approached, they ran and were suspicious and wary of my attentiveness. At 10 pm the sun was low but far from setting as it was just sliding along the horizon in its near Arctic swing.

I became a reindeer. Animals can feel a human’s focus so I directed my attention elsewhere and pretended not to see or be aware of the pair. I mimicked their grazing with the same body language and pace that they set. When they stopped and starred at me I casually picked grass and walked slowly away in another direction. Two hours later and a couple miles further into the forest they finally decided I was not a threat and calmly laid down to rest. I slowly crawled to within a few feet while creating no suspicion or fear. The next hour was spent lying next to them and reveling in that special realm of fearless company with a wild animal. Trust. As the sun finally went below the horizon I decided it was time to hike back to my camper, hoping I would find my way. I had wandered like the reindeer and did not pay much attention time or where I was going. It was meant to be only a short hike and now had turned into several hours of primal bliss. I was lost in another world.


My ancestors from northern Europe followed and stalked these reindeer’s ancestors for thousands of years. It was their prime animal to hunt, that is known. This evening seemed like I was simply and naturally following the ritual that was played out thousands of times before. Instead of a spear I held a camera. Instead of killing the reindeer for my family and our survival I was making a photograph. Instinct.

On my way back I paused and turned to see a full moon rise through the trees as the reindeer also decided to move on. As they passed under the moon I had a powerful feeling of joy and accomplishment that stays deep within me today. A tear rolled down my cheek. A thousand generations later, this is what I was born to do."

Pic of the Week (Sep. 05, 2014): M613 Reindeer Moon
Pic of the Week features the images of Jim Brandenburg, as selected weekly by his staff. With each selection, we hope to highlight the depth, breadth, and splendor of his work.

Pic of the Week Special Pricing
Purchase this week's Pic (print, matted, or framed - 8x12" or larger) and receive 30% off during the week it is featured (Sep 05-12)! Contact the Brandenburg Gallery in Ely, Minnesota (877) 493-8017 to take advantage of this special pricing.